Remember my Sanskrit exams earlier this year? I wrote at the time about the small support network I gathered around myself as I put myself forward for these exams, feeling very much out of my depth but with a determination just to try and see what came from it. I tried to enjoy the accelerated learning process (aka putting myself in as a candidate way before I was ready!) rather than obsessing about the need for a perfect result as I would have done back when I was at school.

Of course if this was a perfect yoga story, I’d tell you that by letting go of the results and just focusing on learning, it all worked out perfectly for me. It’d be a story of abhyasa and vairagya, of practising without attachment to the results.

And that, dear reader, is exactly as it turned out for me!!! Miracle as it is, I somehow got awarded A* with a mark of 92%. It’s not false modesty to say that I didn’t expect this. I didn’t actually think this was mathematically possible given my calculations of how many questions I screwed up on the language paper. My knowledge of sandhi rules and the dual is so sketchy that I must have made more errors on these questions alone than the missing 8% suggests!

Well, unbelievable as it is, I have it in writing from the exam board (shiny certificate to follow in a few months) and consequently I’ve been doing a little modest celebrating this week. Hubby took me out for champagne and pizza (two of my favourite things!) and although work has been so hectic this week I was practically asleep in the restaurant after long office days, it was still fantastic to toast myself and my achievement!

And in the days following I’ve been dropping a line to various people in my small support network, wanting to share my joy and the great result, but also wanting to tell them how valuable their encouragement has been. My yoga teacher first introduced me to Sanskrit. I remember chanting some sutras from Patanjali in my first classes with him. More recently he’s been encouraging me in small acts of daring and was full of support at the idea of blitzing my way out of my comfort zone and into some difficult learning in a short time, rather than my habitual measured approach. I would never have dared without him.

My old Sanskrit teacher who will doubtless be gobsmacked that I’ve achieved this. When I last saw him some time ago, I was struggling to remember even the most basic grammar and all my written work came back covered in red ink. I was not a promising student and we ended up parting ways.

My old Classics teacher who ruled by fear and made failure no option as I studied Latin and Greek under him at school level and then onto university. Even he can’t criticise 92% too much! 😦 Still he gave me a great work ethic and a model for how to approach intellectual problems, and I’ve retained my love of ancient languages and literature.

And various friends, near and far, who made me feel as though any outcome would be fine with them at least. Even including the American philology professor who perhaps dreams in Sanskrit himself, given his natural ability with languages. He refused to laugh at me even when I self-consciously mocked myself for undertaking this small exam, which I feared would be so trivial in his eyes. 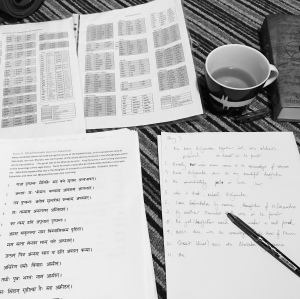 And finally Hubby who repeatedly coaxed a little more study time out of me when I was tired and stressed and who quizzed me so much on definitions of philosophical concepts that he even made up a little song about Brahman and Atman and he started to memorise some Bhagavad Gita verses because he heard me chant them so often. His favourite half line: samatva yoga ucyate (Equanimity is called yoga) was a lesson in itself throughout the intense study and beyond.

Yes, I passed this exam through my own efforts and hard work and determination and I’m enjoying the recollection of all that work which helps me feel really satisfied with the end result. But I’m also enjoying recalling all the moments of encouragement, large and small, that I received along the way. Knowing I don’t always have to feel alone or constantly prove myself in the eyes of others — that’s the true learning for me.

6 thoughts on “Under examination”