We had dinner with neighbours just recently. They’re only a door away but even so our interactions have been quite limited. An Englishman’s home is his castle after all. A party at ours a couple of years ago is still the longest time we’ve ever spent together; it’s just quick hellos in the street as we hurry off into our unconnected lives or cheerfully lobbing a lost ball back over the garden wall in the summer as their young daughter develops a stronger throwing arm!

Dinner-time conversation with a mixture of Europeans and Indians bounced about in many diverse directions. Despite having a doctorate from Cambridge I was one of the least educated people around the table and a lot of the time I was happy to sit and listen rather than needing (or being able!) to join in. I love hearing people talk about their passions and areas of expertise whether it was stochastic differential equations, comparative law, or Latin hexameter verse. It’s a fascinating window on other lives and other people’s ways of experiencing the world.

Of course the yogi side of me was fascinated by the Indian imagery all around me and I had trouble not staring or asking loads of childish questions about icononography and symbolism. Amusingly they even had a copy of Sanjay Patel’s childrens version of the Ramayana (such stylish illustrations!) which I’d come across recently from one of my teachers. Everyone was curious about me teaching yoga and I felt very shy about my abilities and understanding. …Not least when it turned out our hostess used to practise with Desikachar.

I wanted to ask a million questions… but couldn’t think how to, and the conversation turned.

After dinner she and I sat together crossed-legged sharing a couch, sipping whisky. “Did you really say you knew Desikachar?” I asked shyly. And she told me a little about him. How they used to practise pranayama together as he treated her insomnia when she was a teenager. About his wisdom and kindness. But mostly she talked about his recent demise (during my TT in fact) and about her sadness and confusion about his latter years and about the direction of the family now. I didn’t want to intrude, despite my curiosity. “And my grandfather was a student of Krishnamacarya’s” she finally remarked with a twinkle in her eye. She looked for my reaction, reaching out and touching my knee somewhat conspiratorially. 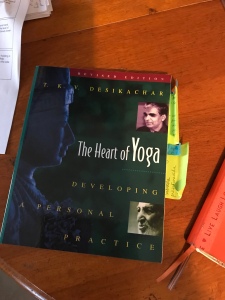 Oddly I’ve been thinking about Krisnamacarya recently. Something my teacher had said in class sparked off some questions in my mind about lineages and what my way of practising owes to this man and why my teacher had picked Desikachar’s Heart of Yoga as our TT textbook. It was referenced so obliquely during training I’m not sure what I might have learned from it…

So now I’ll go back and re-read, in the light of my slightly less rudimentary understanding a whole 18 months on from TT(!) and because my hostess spoke so highly of him as a man, every bit as much as for his therapeutic care of her.

I feel a tiny bit closer to the source of so much wisdom and learning, and the sense of being connected to that, however tangentially, feels quite beautiful. But I also feel very humbled, aware of how shallow my experience and understanding is. I should pull my yogic socks up a bit and be sure to keep open to learning. After all she attends class locally now and her young teachers with their hybrid astanga style and fasionable lycra have no idea about her first experiences of yoga. If they only knew…

One thought on “Out beyond the castle defences”

Insights & Expert Advice for This Decade and Beyond

The Power of Story, Reflective Writing, Yogic Musings, Poetry,Wild Wisdom & Honoring The Divine Shakti in all Her Forms.

Yoga, Photography, and Fitness, oh my!