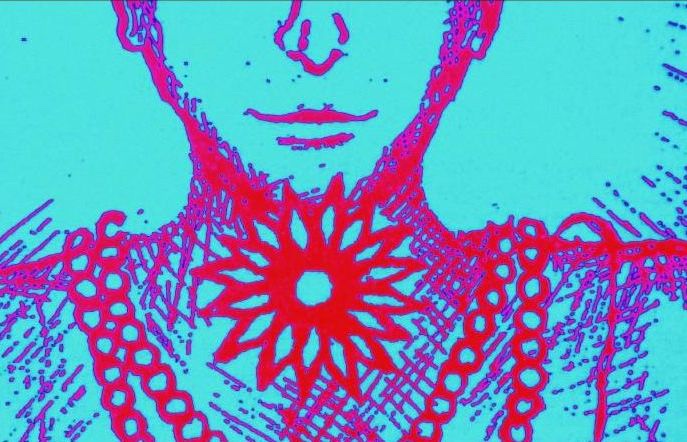 When I take yoga class at home I use earbuds, so only I can hear what’s going on. Hubby got fed up with having to endure an hour at at time of a yoga teacher’s instructions. He’s not keen on yoga teachers — despite living with one! 🙂

I can see why it might be irritating to him, with yoga class invading his home space. But for me the sound of my teachers’ voices are so important and so familiar. I realise how many endless hours I’ve listened intently to them, trying to follow their instructions, allowing myself through a class to be emboldened, energised, coaxed and cajoled, finally soothed and relaxed by them. Each class is a journey they travelled with me, their voice keeping me company as I traversed my inner landscape. Their commentary is like a good version of those audio-guides you get at historic monuments —- “Stop at station 14 and look up to see the intricately carved ceiling with its fleur de lys motif….” Something like the familiar Surya Namaskar instructions: “Inhale. Reach up, see the thumbs — Urdhva Hastasana. Exhale fold forward — Uttanasana.”

This week I had a zoom private with my regular teacher which was wonderful in all the ways I enjoy in his teaching — but it was a truly terrible audio connection and I struggled for an hour to understand what he was saying to me. His voice did not come through clearly and I missed many words. I said that talking to him was like watching a badly dubbed foreign film where the lip-synch has gone wrong and the audio never matches up. I made it a joke, but actually it was a deeply frustrating experience. If it were possible to tear your hair out whilst holding caturanga I would certainly have done so! I wrote up my notes diligently right afterwards and took away lots of ideas, but I sorely missed the feeling of connection from easy speaking and listening with him, the reassurance of his customary phrasing and the joy of his familiar timbre.

The following day by coincidence I was booked into public class with my second teacher. Her voice is also familiar to me from several years of guidance, albeit less frequently. She has a commanding energy to her instructions that always keeps me on my toes in class! Her zoom voice came through just as loud and clear. I closed my eyes and it was as though I was sitting right before her in physical space. At the first chord of her harmonium for the opening chant tears welled up so suddenly and poured down my cheeks. I didn’t join in the chant, I just let the sound of her voice envelope me in its sweet vibration — bright and uplifting, yet poignant to me and full of nostalgia for our lost physical closeness, now just a memory.

Practising in one’s own space, yet in the presence (virtually speaking) of a teacher is an odd scenario: at once a formal class yet simultaneously on one’s own terms at home. As she cued the first physical postures I got up to fetch a box of tissues which I put to one side of my mat and I noticed her start slightly as she saw me. I cried gently through the beginning of the practice. Without the inhibitions from being with other students, I let the tears flow and drop onto the mat beneath me in Adho Mukha Svanasana and hiccuped my way through early seated rotations, until we came to wall handstand when I hung upside down and suddenly found my still place, my equanimity. The intense focus on breath, and bandha, and muscular engagement was such that there was no space for further emotional upheaval. Strangely I was able to settle here, upside-down.

At the close of class, I usually feel a little foolish chanting my solitary OM. But on this day I let go of the self-consciousness. Instead I lifted my voice, allowed myself to expand into the sounds and grow a little bigger. It was my small, inaudible offering to my teachers, whose words are always in my ears, echoing on months or years after they were originally spoken. In the quietness of lockdown I hear them often and return to their teachings in my memory. There’s a continuity and connection still, whatever the physical distance between us.

One thought on “Vacanam Madhuram”