It’s been a day of scripts. Several hours in the office toiling at my day job that this afternoon meant sorting out a script for regression testing a website. It’s super-boring work, I have to say. When I test I prefer to do it more intuitively starting with the most important functionality and then working my way down to some of the detail. Plus I have a great team that I can rely on to do the nitty-gritty while I take a broader overview. Lucky me! But having a script means that I can delegate better, so I just had to work through the boredom and remember the ultimate purpose. 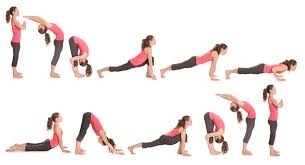 Then home to another script. My teacher’s given us a simple script for teaching Surya Namaskar A. First steps in TT! This script is much more exciting! It’s a nice simple thing to ease us into teaching and has stopped my anxious brain flipping out about whether I know enough, am good enough, and all those other ‘not enoughs’. My body knows this script, has moved to its silent rhythm endless times. I just need to practise verbalising it.

So now that I’ve absorbed the script and done a really gentle practice I’m settling in for a relaxed evening and some quiet contemplation of what is to come. It feels a bit like the night before my wedding! Excited anticipation; a sense of continuity and things unfolding in their natural order, but also a sense that all is changing. I am filled with wonder at the journey to this point — the hesitant steps I’ve taken each day that have brought me to this threshold.

A few people have asked me this week if I’m prepared for TT. I’ve laughed! The question just doesn’t work: I would never feel prepared. But through my yoga I’ve been working on accepting the feeling of wild daring, the discomforting unknown, and the dizzying possibilities — in practice, in life, in TT!

So I’ve put the script away and I’ve opened a card that’s been sitting a few days waiting for the right moment: a message from a friend, offering some last-minute encouragement and support. And I’m listening to the Hanuman Chalisa as I write this. There are some things you can’t script and you can’t prepare for. Instead it’s time for my big leap!

3 thoughts on “Stick to the script?”