It was Greek Independence Day last Sunday, so I went to watch the parade. I was even given a Greek flag to wave! Now I knew this was going to be a military thing, but I was still a bit overwhelmed by it. I stood for two hours or so watching endless ranks of military units of various types marching past in their different uniforms. Most of them carried guns, and the specialist units carried their requisite paraphernalia and I felt a bit sorry for the frogmen marching along in their wetsuits or those who wore chemical suits and gas masks. It wasn’t that warm, but even so this must have been pretty uncomfortable.

But what made me uncomfortable as an onlooker (and a foreigner) were the military vehicles on display. Jet fighters and military helicopters passed by overhead, flying very low over the buildings. But the tanks were what really got to me. They excited the crowd the most and the clapping and cheering swelled massively in proportion to the size of the armament carried by each vehicle type. Tanks definitely elicited the most uproar. It was like watching a firework display — the loudest cheers for the most dramatic explosions.

I know this is an important celebration in Greece, but the sight of these tanks thundering along one of the main streets downtown was quite disturbing. The sound was overwhelming: the ground shook, the buildings echoed with the noise, and I could feel the vibrations in the cavity of my rib cage. It if wasn’t for the happy population waving them on with flags and cheering, it would have looked like a military coup. And the Colonels weren’t so long ago; I’ve heard people describe that first hand.

But although this was quite an awesome spectacle, the thing that interested me most (yoga brain never stops working!) was watching the movements of those marching. Seeing the different marching styles, and marvelling at the synchronised movement, realising the hours of training to perfect this and to discipline the body, eradicating personal habits to conform to the ideal. The swinging of the arms (or often one arm only, for those holding a weapon or musical instrument) was so precise. Did they feel tired? Were their shoulders aching? Did they struggle to maintain form through physical fatigue or by their minds wandering? 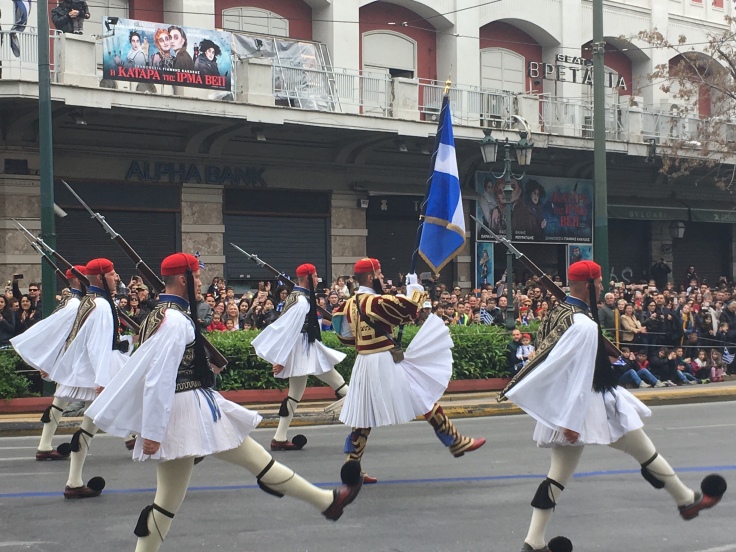 The evzones are the epitome of disciplined movement, with their highly idiosyncratic marching style and distinctive, traditional uniforms. Even more than for the tanks, the crowd went totally mad when they appeared! Their marching style requires them to raise each leg straight out at hip height and slam the right foot down each time to make a noise with the heavy, nailed clogs they wear. Apparently they commonly suffer shoulder injuries, not just from the weight of the gun leaning against it, but also because they are required to slam the gun against the shoulder loud enough to make a noise. I’m surprised they don’t also have hamstring and hip problems, as well as issues arising from the percussive force of stamping one foot so often. I wonder what conditioning exercises they do between times….? Maybe while I’m here I should offered my yoga teaching services?? I’m also amused that while they’re marching an army officer in regular khaki accompanies them and runs up and down the line sorting out any little niggles with their uniforms. In particular the tassel on the hat gets easily tangled if they don’t maintain perfect posture. Again I’m reminded of being in class with the teacher working his way along a line of downward facing dogs, making small adjustments to each student!

When they’re not marching on Independence Day, the evzones stand guard outside the Presidential Palace, the tomb of the unknown solider and the military camp. In between the hourly ceremonial movements, they are required to stand completely still no matter what. I’ve heard this described as an almost meditative experience as they find the fortitude to remain motionless, despite the weather, any physical discomforts — or the pesky tourists who come up and taunt them. And I can’t be in Tadasana more than a few breaths without wanting to fidget massively!

2 thoughts on “On parade”