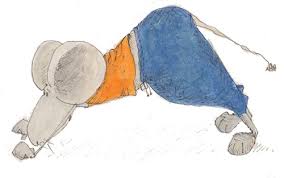 I committed the ultimate London yoga studio faux pas — I spoke to people in the changing room!! I had had a great class. …Well apart from two name calls from the teacher during class which I found slightly embarrassing — being asked to translate Sanskrit after the opening chanting (of course not a chant I knew!) and later a rather sarky “what’s going on with your face, [name inserted]?” suggesting that I was frowning my way through class even more than usual. Must work on my chaturanga serenity face!

So after this great flowing practice, I was feeling expansive and pretty upbeat. I’m used to my small local studio where I’m quite known and usually exit the changing room by wishing everyone well. London types clearly don’t do this and all I got was blank stares in return! I felt like the new girl at school all over again, not quite cutting it with the cool kids!

And then as I sipped tea in the reception area, gathering myself for the outside world, two yoginis who’d been in the changing room came up to chat. One just passed the time and soon left, the other I talked with for quite a while. About TT and whether she’s ready, about going back to asana basics and how the more you develop the more you also simplify, about dealing with shoulder stuff…. It was a really nice connection!