I wear a Ganesha pendant on a chain that I originally thought was long enough for it to disappear under my clothing most of the time. But it doesn’t. And people keep commenting on it. A lot just recently, for some reason, so I’m feeling hyper-sensitive.

At work people simply ask what it is; at the studio there’s often some distinctly unyogic coveting, since the most common question is “where did you get it? I want one!” Either way I feel slightly uncomfortable. I’m not Hindu, so is it weird I wear a representation of a Hindu god? Hopefully not, since for me Ganesha has much more personal significance than any symbol relating to the state religion of my native country.

But some people love all this stuff, right? They want to display their yoga credentials however they can. Yoga marketing is a big deal. And, yes, I too have some yoga themed t-shirts and an increasing collection of outfits to wear to the studio. I guess somehow I need to feel the part in class, even if at home I most often practise in my PJs. But I’m not about to wear my mala beads to the pub… Yes, I see this! And I’ll admit I simply didn’t know what to make of it the day I saw one yogini’s Ganesha tattoo on her, hmm, let’s call it upper thigh. But I think for her it was a really meaningful act and it’s not on public display so maybe that’s no worse than my pendant (or more discrete even, since presumably few people see it?!).

And then… then I came across some leggings with Devanagari script on them — and I couldn’t resist! So I’ve just got myself an outfit that means I’ll have an Upanishadic mantra stretched across my butt! 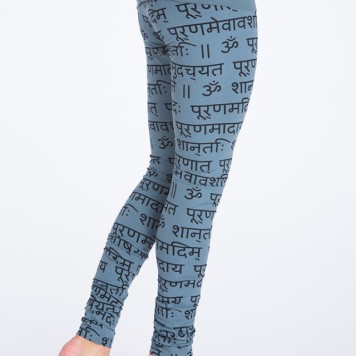