When I was in bi-lingual Montréal recently I quickly figured out the difference between végétarien (vegatarian) and végétalien (vegan) on menus. Except that I then realised it’s not quite that simple and there is also a French word végan. I think I’m right in saying that végan goes beyond diet and refers more to lifestyle, avoiding the consumption of animal products in the widest sense of ‘consumption’. In English I though veganism always incorporated this lifestyle aspect also. But I know I have much to learn… 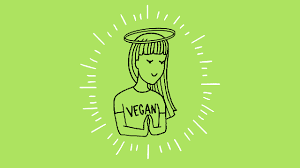 A yogi friend of mine is on the cusp of going vegan. She’s bought her last box of eggs, she says! It turns out she means ‘vegan’ largely in a dietary sense. As we talked over (black) coffee we baffled each other with our respective choices. My diet has become essentially vegetarian but I’m not at all trying to transition to veganism. I couldn’t yet nourish myself properly without dairy and eggs; I don’t know enough about how to do that in a way that doesn’t undermine all the self-care that I’m working on in other ways. I got the impression she thinks this is a shortfall in effort or commitment. She sees me as a serious yogi in other respects, but not conforming to the ideal yogic diet.

For my part (and I warn you, here’s the super-judgmental part from me) I sometimes wonder if the diet is the most superficial aspect of veganism. It’s increasingly socially acceptable and there are always other vegans to reinforce your choices and make you feel good about what you’re doing. I sometimes see it as verging on something of an egocentric choice, more about the glory of practitioners than the planet. In my experience vegans can be quite vociferous about their virtue!

Food aside I am trying to make wise choices in other aspects of consumption. I bought virtually no new clothes for about a year since I felt overwhelmed by the selfish over-production, gratuitous wastefulness, and problematic production methods of so much of our modern supply chain. And not just in clothes! In the end Hubby starting buying clothes for me and offering gifts I couldn’t easily refuse. It’s OK, he has a good eye, but it made me realise he’s not ready for a sackcloth and ashes wife, even if I am totally happy looking rather less than polished! 🙂

Endless hours of research later and I’ve discovered various small British and European companies that sell more or less ethical clothing and accessories. I’ve gone on a bit of a shopping spree more recently. I have a new thermal jacket made of recycled plastics which the company will patch for me when I get a hole in the shell, I have some vegan footwear (and a three month correspondence with a well-known German brand as to why their vegan footwear came with a leather label!) and some ‘wild hide’ barefoot shoes smart enough for the office but apparently made from free-roaming animals, I have bamboo undies, organic cotton tees, vests and rucksack (also with cork rather than leather trimmings, which is apparently harvested in Europe as part of a sustainability project to maintain the native cork trees). I’ve read the notes about the supply chains, factory conditions, and use of chemicals and the level of water consumption.

I have no idea if any of this makes much difference globally. But I’m proud to wear these garments and know that I’ve put the effort in and applied some discrimination. I do still shop on the high street sometimes and I still impulse-buy — and I’m horribly aware of the irony that most ill-informed choices are made in my yoga wear! 😦 Whatever this lifestyle is, it’s a work in progress, a practice. I’m still learning, still making mistakes.

Or maybe I’m practising ahimsa to the economy by spending my money on new stuff? The questions and decisions are endless. So I’ll drop the negative judgements I make about myself and about others. I guess we’re all doing what we can.