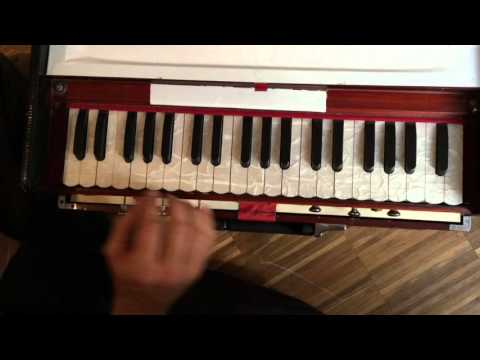 At work today I’ve been listening to a recording of a live kirtan hosted by a local Hindu group. I did this as a strange stress relief measure as I tackled an inbox burgeoning with technical queries that I must somehow understand and recommend solutions to. It pretty much worked — though it didn’t do wonders for my productivity!

And in my more relaxed, less productive state,  I found it really interesting to compare this to my experiences of yogi-hosted kirtans. In the latter there seems a much greater sense of performance and western up-tightness about getting it right, sometimes with some very cringe-making ritual expressions of obeisance that seem more about the look of it than the meaning behind it (yes, I know I’m being massively judgemental here…). In the Hindu group it sounds as though everything just flows more spontaneously. The kirtanista changes seamlessly and somehow it all works out. There’s a relaxed sound as though no-one is trying too hard. Maybe they’re just feeling the bhāva. 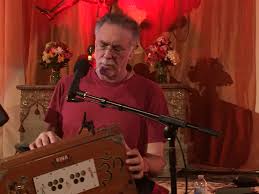 It reminds me of the difference I hear when listening to the recordings I have by some of popular western kirtan wallahs. I used to love Krishna Das the most. Actually maybe I still do. But now I also really like the near-chaos I hear in Bhagavan Das. His music sounds freer and messier. It has a jazzy improvised feel, as though his ears care less than his heart.

None of this is terribly relevant to my own chanting at home which is novice, unmusical and seriously uptight — especially as I found that Hubby listens to me through the wall at home…! I sometimes catch him slightly ironically humming to himself ‘rama bolo’ or ‘hare krishna’ which amuses me greatly. He claims to hate all yogic woo woo stuff and anything religious, but somehow it’s got into his head anyway.

Audience aside, in my practice I’m letting go of striving to be ‘better’ because I know if I let it my chanting will evolve the way asana does. Form ultimately dissolves into experience, and in fact by the time you’ve got to the point of feeling that, you’ve clocked up enough practice hours that the form is pretty OK anyway. Physical alignment magically takes care of itself while you drop into the immersive experience of the breath. So in chanting when the Sanskrit sounds are comfortable in your mouth and the meaning has percolated down from the thinking brain to rest in your heart, I guess the musicality takes care of itself. And when you add the challenge of the harmonium and the coordination required there — that’s just like fancy arm balances and vinyasa sequences in physical practice: at first an impossible challenge, then gradually it becomes the connective glue that binds you more strongly in your dhyana.

Perhaps? Only time will tell in either practice.

For now I can just flow with my sense of curiosity, fun, and faith in the process as I wonder at the unexpected relationship between mantras and asanas.

6 thoughts on “Heart and ears”

the juice is in the journey

tales of love, growth, failure, and everything inbetween